From The Fayetteville Observer 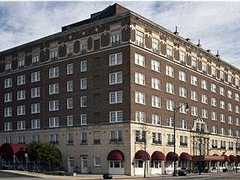 The city of Fayetteville has a filed a motion in court to force the auction of the Prince Charles Hotel.

The city wants to be paid for an outstanding $70,000 judgment against the owner and also wants the condition of the dilapidated property addressed, court papers show.

According to the March 12 filing in federal court, “most of the city’s health and safety concerns regarding the hotel remain unaddressed by the property owner, so continuing the status quo without further action is not in the city’s or the public’s best interest.”

Lawyers for John Chen, the owner of the downtown landmark, have until Monday to respond to the city’s filing to reopen the bankruptcy case involving 450 Hay LLC, the company Chen created to buy the hotel and adjacent land.

According to an agreement incorporated into the bankruptcy plan approved in 2013, the hotel was supposed to be auctioned no later than 90 days after developer David Levinson informed the city that he was backing out of plans to renovate the property. Mr. Levinson is the owner of Anderson Creek Country Club and the new Anderson Creek Charter School

For now, the Prince Charles cuts a forlorn figure, shuttered since 2010 because of numerous fire code violations. An unsafe building notice remains taped to the front door. The sidewalk in front of the empty building has long been cordoned off to protect pedestrians from chunks of masonry that fall from the crumbling facade.

The city sought to force an auction before, in 2012. Chen averted that sale by filing for bankruptcy protection.

In 2013, Levinson announced a $4.5 million plan to redevelop the building as a mixture of condominiums and office space. But he backed out after the city declined to pay for $2 million in damage caused by vandals since the building had been closed.

Rob Fields, Chen’s lawyer, said earlier this month that the city would be paid and that Chen was working with multiple unnamed parties to come up with a financially viable plan for the property.

Fields did not return calls Wednesday.

If Chen does not file a response with the court on or before Monday, the city’s demand for an auction could be granted.

“The city can still consider all viable options, but must preserve its interests as well.” city spokesman Nathan Walls said in an email.