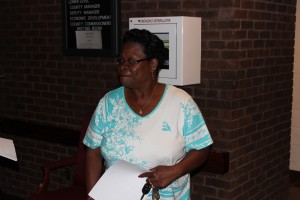 In a much debated race for District 1 County Commissioner, Barbara Mckoy was elected as the new Harnett County Commissioner etching by Carnell Robinson and Lewis Bell. Ms. McKoy won with 671 votes to Robinsons 440 and Lewis’s 244. Ms. Mckoy faces no opposition in November.

Ms. Mckoy said that she won because she is for the people and the lies that were told on her did not prevail..

Chad Smith was able to defeat incumbent Kevin Gregory in the Republican primary for school board district 5 with 261 votes to 232.

Susan Byerly easily secured the Democratic primary NC House 53 against Thomas Ellis with 2,372 votes to 543, Byerly will face David Lewis in the general.

Renee Ellmers won the Republican Primary against Frank Roche with 20,510 votes to 14,226.

The Democratic primary for congress with Aiken, Crisco, and Morris was too close to call and time of release..