Is the local Republican Party being destroyed from within? 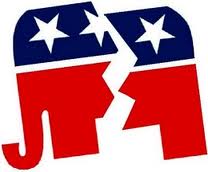 In the years following the 2012 elections many longtime republicans and elected republicans have shared their disappointment  with the tactics used within the party to cherry pick candidates if they don’t agree with an elite few within the local party. After the 2012 election Don Davis the former NC house member spoke out against the tactics that were being used within the party to hand pick their elite candidates. At that time Daniel Glover who was a candidate in the same senate race as Mr. Davis left the party and ran as unaffiliated against Jim Burgin for County Commissioner. Then Lewis Bell made it clear that he was leaving the party due to the tactics used and differences in racial issues.

The 2014 primaries have seemed to pan out the same way, with Chuck Levorse and Gary House being targets of the republican machine within their own party. Many know that their opponents were recruited to face off with them during the 2014 primaries; one of these candidates is speaking out through his own blog. The below blog was copied from current county commissioner Gary House

My Disenchantment with Local Republican Party

Harnett County Board of Commissioners

I have always have had strong Republican, conservative beliefs.  For about 10 years, I was a regular at most Republican Party functions.

A little over two years ago, my dissatisfaction with the local Republican Party began.

NC House Representative David Lewis did not want  McNeill in Raleigh under any circumstances.  He also did not want Davis there either.   Glover was a political newcomer and I do not believe anyone thought he had the name recognition to win the seat.

When Davis decided not to seek re-election for State House over a decade ago, he helped  Lewis while running for the seat that Lewis still holds to this day.

Davis repeatedly asked Lewis for his support.  Lewis avoided him.

I was told that the legislators in Raleigh did not want Davis back up there.  Davis would not toe the party line and follow suit with the ones in power.

Davis asked me and Commissioner Jim Burgin for our support.  We both told Davis we would support him.

In an attempt to keep Davis out of Raleigh, Lewis began trying to find another candidate to run for the NC Senate seat.  I was told that Erwin Mayor Patsy Carson was contacted and declined.  Burgin told me himself he was contacted and he declined stating that he had more work to do in Harnett County.  A few days later I received a text message Lewis asking me if I were interested.  I also declined.

To the best of my recollection, about ten days later, Ronald Rabin announced his candidacy.

I have no idea how many people were asked to run in this NC Senate primary to keep McNeill and Davis out of Raleigh.

Davis actually won the primary but did not receive enough votes to win it out-right and there was a run off between Rabin and Davis.

Even though Burgin still claimed his allegiance to Davis, both Davis and I could sense he had shifted his support.

Burgin called me around this time and said that David Levinson, one of the developers of the Anderson Creek Club, wanted us to come to the Club to meet with him.  I told Burgin that I had some deadlines and they could come to my office for a meeting.  When they arrived, Levinson had his attorney Rebecca Davidson, Lewis and Burgin with him.

Levinson started the meeting by saying unkind things about Davis.  Highly offended, I told them if they were there to bash Davis that they could all hit the door.  I told them than Don Davis was a fine Christian man who had been a friend of mine for 20 years and I was not going to sit there and listen to garbage.

Rabin went on to win the run-off.  I have since been around Rabin on several occasions.  I believe he is a good man.  I do not believe he knows some of the tactics used in his campaign on his behalf.

Later, when I was drug into two unmerited lawsuits.  I went to Lewis and discussed the suits with him.  He told me the Republican Party would not let me stand alone.  He hooked me up with an attorney that would set up a legal defense fund for me for $3000.  He claimed he would help me raise money for a defense.

I started doing some research and found that I could set up a legal defense fund for nothing through the State Board of Elections.

Lewis never helped me raise a penny.  The Republican Party never even called.  Yes, they left me out there to deal with these issues by myself.

Burgin and I used to talk 3-5 times a day.  Once I nominated him to chairman of the county board, things began to change.  They changed quickly.  I was warned by a few people that Burgin was not my friend.  I blew those opinions off as blasphemy.  I considered Burgin to be one of my best friends.

Many of the changes Burgin led me to believe would happen never did.  It was not until Burgin started pushing for the reduction or elimination of the $500 rec fees assessed to developers in the county that I began to realize that if I did not agree with Burgin, I would be thrown under the bus.  I have always worked for the best interests of Harnett County and not special interest groups.  Once I realized that Burgin worked for special interests and would do any thing to climb up the ladder politically, I started distancing myself from him.

When the next December rolled around, I voted to make Joe Miller, another Republican, chairman of the county board.  Burgin and I had always discussed the need to rotate the chairman.  After he occupied that seat, that opinion apparently changed.

I knew, without a doubt, that once I voted for Miller that Burgin and Lewis would work against me in my upcoming election.  I even knew they would use Lewis’ political consultant to go after me like he did Davis.

I would not succumb to that pressure.  Burgin had to be replaced as chairman.  Miller was the best choice. Miller is a straight-forward, down-to-earth person who tells it like it is.  He does not work for special interests.  I voted for him because that was what was best for Harnett County.  I knew the consequences.

I was correct in my assessment of the consequences.  Burgin and Lewis did work against me in the recent primary and Lewis’ political consultant did much of the work.

During my re-election bid, I had a few conversations with the Harnett County Republican Party Chairwoman.  She told me that she was also disappointed in the tactics of the local party and when her term expired, she was going to distance herself and just work for specific candidates.

It appears that I am not the only one who has become disenchanted with the local Republican Party.

Politically, I still share many of the Republican beliefs but I cannot support the win at all costs philosophy that has been brought into our county.