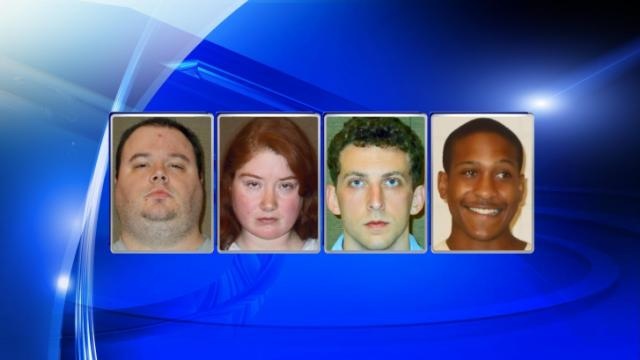 Four people have been arrested in the case. Investigators are searching for an unidentified fifth person who may be in the Raleigh or Fayetteville areas.
Investigators used still photos from a video of an unidentified suspect to seek help from the public in finding him. The images are from a video of him having sex with an adult female, and investigators say there is another video of him committing a hands-on sexual act with a child. Investigators say the logo in the upper left chest area of his jacket may say “DuPont Tyvek.”
Anyone with information about the man in the pictures is asked to contact Detective Brad Byrd with the Harnett County Sheriff’s Office at (910) 893-0150.
Investigators say Bailey Joe Mills, 33, who was convicted three times on charges related to sexual contact with children, ran the operation out of his former Nicole Drive home. They believe Mills ran the day care and mentoring program to attract young girls to his residence and to create a relationship with their parents. Mills then offered the girls money to have sex with men he found through different social media sites, authorities said.
Byrd described the evidence as “very disturbing.”
“As I go through all the evidence, I see everything that’s happened to these children,” he said. “It’s heartbreaking.”
Mills has had multiple convictions over the years:
- In 1997 he was convicted of taking indecent liberties with a minor.
- He was convicted in 2000 for sexual assault of a child, which required him to register as a sex offender, receive psychological treatment and not be around children under 13. His name was expired from the registry in 2006.
- In 2011, Mills was convicted of felony indecent liberties with a child, requiring him to not be around children under 13 without an adult, to stay away from the Shelley Lake Apartments in Raleigh, continue psychological treatment and adhere to a curfew.
- Mills was arrested in January for having sex with a 13-year-old girl.
The operation, which involves about 10 male and female victims ranging from ages 1 to 14, dates back to 2013, but it wasn’t discovered until Mills’ arrest in January. Investigators said they realized they had a much bigger case after going through Mills’ computer and cell phones.
Mills, formerly of 184 Nicole Drive in Sanford, remained in the Harnett County jail Monday on a $500,000 bond.
Three others have been arrested in the operation:
- Elizabeth Holland Mills, 34, formerly of 184 Nicole Drive in Sanford, is charged with second degree sex exploitation of a minor and indecent liberties with a child. She is Bailey Joe Mills’ wife. The couple has two children together, both under 18. Investigators have not said whether the children were victims of their parents’ alleged illegal activities. She remained in the Harnett County jail Monday on a $500,000 bond.
- Sgt. 1st Class Jordan Everett Busse, 29, is charged with felony conspiracy and computer solicitation of a child. Busse is a Fort Bragg solider assigned to the 3rd Special Forces Group. Fort Bragg officials said they are cooperating with the investigation. Bailey Joe Mills created a chat-room application allowing Busse to talk to a 12-year-old girl, according to the Fayetteville Observer. Busse posed a $75,000 bond on June 12.
- Rashawn Rodriguez Drake Jackson, 20, of 151 Rental Lane in Sanford, is charged with first-degree sex offense with a child and felony conspiracy. He remained in the Harnett County jail Monday on a $150,000 bond.