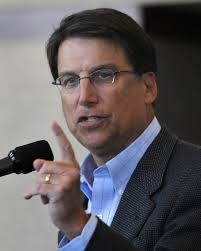 Gov. Pat McCrory on Monday said he will veto the charter school bill if the legislature approves it, over a provision that would keep secret how much employees are paid.

“We need transparency of salary information for all public schools — both traditional and charter schools,” McCrory said in a statement his office released. “I will veto any attempt to hide the names of charter school employees from the public record and I encourage the General Assembly to pass the legislation without this provision.”

The bill was amended to include that provision and passed in the House on Thursday.

Senate Bill 793 covers a range of charter school issues. Rep. Charles Jeter, a Republican from Huntersville, said he proposed the amendment because charter schools use merit-based pay, rather than the state salary schedule, and because employees report to private nonprofit boards.

That was a reversal of his position in March, when he said charter schools should be subject to public disclosure laws as are public schools. Both receive public money. Rep. David Lewis, a Republican from Dunn, supported the amendment, saying disclosure would create “a hostile work environment.”

(1) Rep. Lewis said that he did not propose the bill or amendment but local news sources have quoted him in support of the bill saying it would cause ” a hostile work environment.”

The House passed the bill 99-16 and sent it back to the Senate where it originated. The vote on the amendment to keep employees’ names and salaries secret passed by a margin of 65-48.