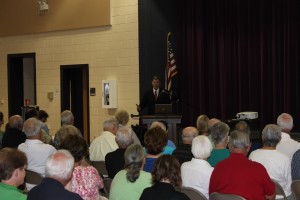 Tonight in Angier a large crowd gathered in the elementary gymnasium to hear about fracking from Chairman Jim Womack of the NC Mining Board. Senator Ron Rabin an outspoken supporter of fracking gave the introduction and welcomed everyone to the meeting and said that he felt it was his obligation to allow the public transparency of the fracking procedures.

Mr. Womack prepared a slide show indicating the areas that were most likely to have natural gas available. Mr. Womack said that all of the media hype and attacks on Mr. Rabin were not warranted and that it was some of the best legislation since the republicans took control of Raleigh.

Mr. Womack went through his spill about fracking and how safe it was, and that many of the reports were false and that one report that came out by a professor who has been studying fracking for 20 years at Cornell University was not the best report to go by and that it had limitations that does not explain everything.

The crowd was not able to ask questions but instead had to write them down and they were pulled from a pre-determine pile of question forms. One question was brought up about the chemicals that are used in the fracking process and did they cause Cancer, Mr. Womack said that some of the Chemicals are known to cause cancer but since it’s a trade secret that they could not release the chemical names. Mr. Womack got tensed when he was repeatedly asked about the Chemicals and said that you could drink the chemicals and they would do no harm. One lady said “really come on give me more credit than that, he said I could drink it but it causes cancer.”

Many people are still wondering why they held the meeting in Harnett, some of the audience members that spoke with the Harnett Dispatch said that this “ meeting is a political rally for fracking in order to take the negative impact that has been cast on Senator Rabin in the last few months . Most people in the audience noticed a large police presence that included 3 Angier Police officers, 3 Harnett County Sheriff’s deputies and 3 NC General Assembly police officers. Many said that it’s a shame that taxpayer’s dollars are going toward this many law enforcement officers when they are needed on the street. Other elected officials on hand with Senator Ron Rabin were Commissioner Gordon Springle and Commissioner Jim Burgin was on hand to hug people and ask them how they were doing.

The Harnett Dispatch spoke with one political consultant after the meeting and asked about their take on the meeting and the impact it will have on fracking and Senator Ron Rabin. “well the problem is I think that this whole horse and pony show will backfire on Rabin’s campaign because they did not answer any questions and were very unclear about the chemicals used and now the Chairman of the Mining board has said that some of the Chemical are known to be carcinogens “Cancer is a bad combination with people and water.

In a report released from news channel WNCN it states that most of the people came skeptical and left skeptical. 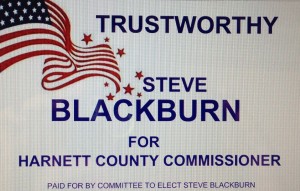